The early morning sun shines brightly through the chinks of Aaron’s slab hut at Sheepstaion Creek, warming his face as he lies sleeping on his bunk.
In Aaron’s dream, Kate Byrne is standing before him in the cool water of Reedy Creek, the hem of her dress pulled up around her calves. He slides his arms around her waist and pulls her close, the sweet smell of lavender radiating from her auburn hair. “I never want to be without you, Aaron,” She declares softly, her head buried in his shoulder. Aaron lifts her face to his and kisses her tenderly, “Nor me, Katie.”
He rolls over onto his side as a wafting of tobacco smoke rises up his nose and opens an eye, his vision settling on Joe, who sits on the floor, smoking his corncob pipe.
“I had a feeling you’d wake as soon as I lit this,” Joe says, his concentration taken by the pencil and notebook in his hand.
Aaron stretches and rises, rubbing a hand across the stubble at his chin.
“What’s the time?”
Keeping the pipe clenched between his teeth, Joe pulls out his fob watch.
“Quarter past eight,” He replies, puffs of smoke escaping his lips.
“I suppose you’ve drunk the remaining tea?”
Joe reaches over for the pannikin and passes it up to him.
Aaron drinks the lukewarm brew and grimaces.
“Anymore gin?”
Closing the notebook in frustration, Joe stands and ties a brown neckerchief around his throat.
“Why don’t you bloody see for yourself?”
Picking up the black bottle, Aaron swills it, the welcome splosh of gin sounding from within.
He swigs the bitter liquor and drags his hand over the residue that trickles down the corner of his mouth.
“We heading up to Beechworth?”
“I won’t say no to that,” Joe answers, smoothing the kinks in his hair with his fingers.

Walking down Camp Street, the pair pass the post office, where a group of young men and women throw brightly coloured bonbons at each other, a longstanding St Valentines tradition practiced among the upper classes of Beechworth, amusing Aaron and Joe no end.
While they walk between the giggling group, a bonbon is tossed in front of Aaron and he cheekily catches it, much to the horror of the young woman who has thrown it.
Unwrapping the chocolate, he pops the morsel into his mouth and tips his hat at the her.
“I thank you miss,” He declares with a wink.
The group look on them with distain while Aaron and Joe laughingly continue on their way.
Nearing the shop of Mrs De Jacques, where Saint Valentines trinkets, cards and confectionary are displayed fancifully in the window, Joe stops and peers through the glass, his blue eyes skimming over the array.
Aaron follows his gaze to a porcelain statue of cupid, surrounded by dried rose petals and neatly written love notes.
“Thinking of getting Bess something?” He asks.
Joe shakes his head and straightens, turning his back on the display.
“I reckon anything in there would cost double what I have on me at present. Anyway, I’d prefer to gift her with something from my heart.”
“Aye, your precious words,” Aaron scoffs, scratching at the mole on his cheek.
“If you’d spent more time at school, you’d be able to impress Kate the same,” Joe replies.
Aaron clasps a hand on his mate’s shoulder and stretches out his other arm in a show of superiority.
“See Byrne, I don’t need words to impress my girl. Everything she needs is right here.”
Joe pushes him away as a smartly dressed man in tweed steps out of the shop, a heart shaped box tucked beneath his arm.
“I’m going to Ingram’s,” He begins, his gaze following the gentleman as he crosses the street, “You coming?”
Aaron removes his hat and runs his fingers through his hair. He looks back at the display and shakes his head.
“Not today. There’s stuff I need to finish at Sheepstaion.”
Joe’s eyes narrow suspiciously.
“Alright. I’ll see you later then.”
Aaron watches as he walks towards Ingram’s bookshop, his bluchers scuffing over the cobblestones.
Waiting until Joe has disappeared into the bookshop, Aaron enters the store and looks around, feeling the eyes of Mrs De Jacques and her assistant firmly on him.
The extravagantly dressed woman approaches him from the counter.
“Good morning sir, how may I help you?”
Aaron scrunches his porkpie hat in his hands, feeling very much out of his depth surrounded by such finery.
“I’m after something nice for my girl,” He says quietly.
“For Saint Valentines I imagine, yes?”
“Yes, that’s right.”
“Did you have anything in mind, sir?”
Aaron shakes his head.
“I’ve never bothered myself with all this stuff before.”
“Stuff?” Mrs De Jacques repeats in dismay, “What I stock and sell is not merely stuff, sir. People travel from all over the district to purchase the wares you see before you.”
“It’s still stuff though, isn’t it?” Aarons asks, feeling annoyed at being made a fool.
Mrs De Jacques looks dumbfounded at the response, her hazel eyes projecting scorn at the larrikin before her, as if his very presence has lessened the value of her wares by half.
He begins to question why he’d decided to come in here in the first place, surely a nice piece of quartz from Reedy Creek or a night alone with Kate would have sufficed.
“Madeline, Madeline,” Mrs De Jacques begins, waving a ringed hand towards her assistant, “Please aid this gentleman in finding something for his girl. I can no longer stand the ignorance.”

Arriving at the Byrne selection in Sebastopol, Aaron leads his mare into the stable and walks towards the house, where he spots Kate, sitting beneath the veranda reading.
She lifts her head as he approaches, a wide smile spreading across her face.
“Aaron, I wasn’t expecting you until tomorrow.”
He holds out his hand and pulls her into him for a firm embrace.
“I know, I wanted to surprise you.”
“Surprise me?” She asks, her blue eyes glistening. “Why ever for?”
“I have something for you, Katie,” He says softly, kissing her forehead.
“Oh?”
Aaron reaches into his pocket and removes a small grey box, decorated with a red bow.
“I bought this for you,” He says, holding the box proudly in his palm.
A small gasp escapes her lips as she takes it from him and runs her fingers over the ribbon.
She gazes tenderly up at him.
“What’s this?”
Aaron cradles her face in his hands, “Have you gone as simple as your brother?” He jests. “Open it.”
Kate rolls her eyes at him and carefully begins untying the ribbon.
“I went into town this morning with Joe,” He says, smiling at the furrow in her brow as she lets the ribbon fall to the ground. “And when I saw Mrs De Jacques’ St Valentines window display, I knew I needed to purchase something for my girl.”
“Since when have you bothered yourself with Saint Valentines?” Kate teases, opening the box.
“Oi, I’ve bothered today,” He responds, smacking her posterior cheekily.
“Oh Aaron!” She exclaims, pulling away the crepe paper to expose the gift. “It’s beautiful.”
She picks up the wax shaped heart and holds it to the sun, admiring the way the light bounces off it.
Flipping the heart over, she reads the inscription, ‘For the one who has my heart.’
“Oh Aaron, I really am lost for words,” She beams, kissing his cheek.
“Close your eyes, Katie,” Aaron instructs, digging into his pocket.
He takes out a chocolate bonbon and unwraps it.
Kate’s lips twitch slightly at the sound.
“What are you doing?”
“Shh. Open your mouth,” He murmurs, gently tugging on her bottom lip, popping the sweet into her mouth.
A look of delight crosses her face as she savours the chocolate, a fine rarity for a widowed dairywoman’s daughter.
“Why have you done all this for me?” She asks with a giggle.
Aaron picks her up by the waist and twirls her around.
“Because you’ve stolen my heart.” 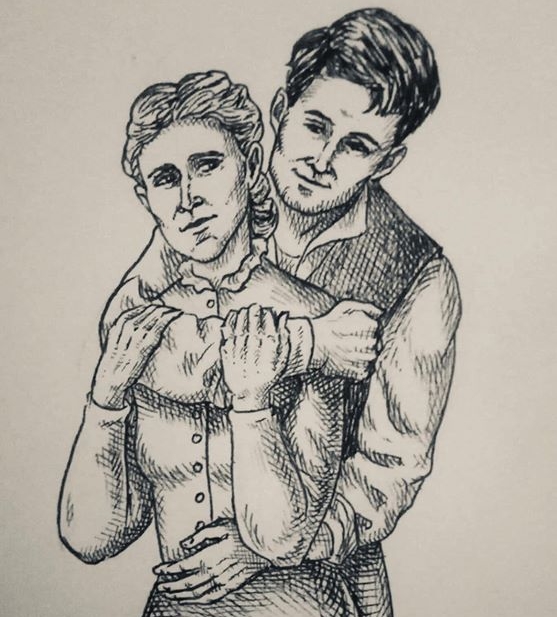 Hello, My name is Georgina, I’m a 25 year old journalism student who currently resides in the, not so small, island state of Tasmania. When I am not studying, I love to cook, ride my horses and most of all, writing historical fiction. My main passion in life is Australian Bushrangers, with Joe Byrne of the Kelly Gang being my most favoured ‘Outlaw.’ View all posts by anoutlawsjournal

3 thoughts on “A Gift for Kate”